GOLDEN STARS
"Big things come in small packages," my parents used to say to me. I was the tiniest of my class every year. (Seriously. You could compare my adult hands to a 9-year-old kid's.)
​
And they were so right. I have always, always, always been the most colorful, vibrant person I know. If you're reading this, you likely already know that I have bright, mermaid-colored hair and a sleeve down my left arm full of brilliantly colored tattoos.

When I was 13, 17, 20, 25, and every age in between, I had this incredible vision of my life: I was going to be a famous musician performing on Broadway, at the Grammys, walking the red carpet, the whole shebang. Over time, I added more and more goals to that and was determined to bring them all to life.

I was in a constant battle with myself. Part of me knew my potential to make changes in this world, to find a success I'd only seen in my dreams. Another part of me hated myself, hurt constantly, and had no idea how to survive.

I had a million and one dreams and goals and I checked every single one off of my list - except that big one. I felt emptier and emptier as the achievements got bigger and bigger until finally, at 24 and 9 months, I couldn't avoid any longer that I'd failed at my biggest goal: "I'm not famous by 25. I failed," I declared.

I fell quickly into the deepest depression I'd ever known and was hospitalized. I spent 3 days in an isolation room, surrounded only by white walls, a hospital bed, and a journal. I had no choice but to face myself, and what I found was magical: 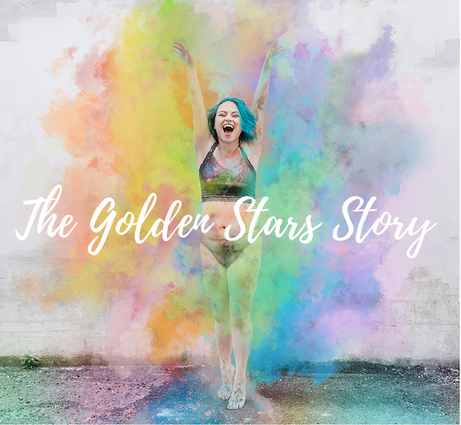 I was out for a drive feeling almost psychotic, my thoughts felt so strong and so loud.

I screamed and agonized my way through them until I got home. As I pulled into my parking spot, I knew I couldn't go inside yet. “I don't want to feel this anymore,” I decided. “I'm not going to subscribe to living my life this way.”

It was in this moment that I felt my attention drawn to my wrist, which had suddenly erupted in heat. My body was suddenly bursting with an energy I didn't recognize and I felt my eyes close. I zoomed in on my wrist to see a horizontal line drawn across in gold. I understood: This golden swirl was a representation of my scars, and the light wrapped around them.

Zooming in further, I found this light wasn't just a line of gold, but a swirl of a million, million Golden Stars.

I began to cry as I thought of scar tissue. People say scars can heal, but they never fully fade; the scar tissue always remains. For the first time, I separated physical and mental scarring. I wondered, “Does that have to be true? Do you have to hold internal scars?”

As these Golden Stars continued to wrap around my wrist, I watched my wounds and scars fade away, building a greater and greater understanding of what Golden Stars really are:

They are all of us.

Every single Golden Star is the millions of people in this world. We can’t do it alone, this life journey we’re on. Every person we meet throughout our lives impacts us, and we impact them. We all have the power to heal from the traumas, wounds, scars, and beliefs we’ve developed.

We’ve constantly found discord and disconnect in the world and in our lives. We’ve constantly lived in an internal battle, regularly telling ourselves we’re winning the fight, against depression, against fear, against ego, against doubt. What if it didn’t have to be a battle? What if it never was?

The way to find peace is not through fighting, it’s through understanding. Different parts of us colliding is what leads to that sense of desperation, fear, fighting. What if you could find inner peace, connection, and the life you’ve always known you could live by learning and understanding every part of yourself?

This is the journey I’ve been on since the night of Golden Stars. The journey of finding alignment, connecting with every part of myself, and finding the most beautiful joy in inner peace.

I began this journey severely traumatized and in full-on war with PTSD. I had the diagnoses of bipolar, depression, anxiety, fibromyalgia, I was in debilitating pain from tendonitis and a herniated disc, I was battling a decade-long compulsive overeating disorder, and I’d been experiencing suicidal ideation for a decade.

We have all been through childhoods. We’ve all developed beliefs and parts of ourselves. Whether it’s been a huge trauma or that one thing your teacher said that affected you and your belief systems:

You already have everything you need inside of you. You’re ready, Golden Star.